¡Metallica played in my home!

… well, kind of. It’s just that a few weeks after having the Gibson Les Paul Iron Cross (a James Hetfield’s guitar replica), I had its partner on m 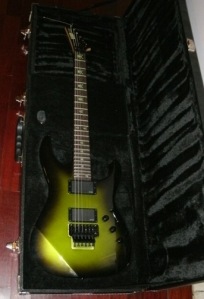 y workbench: the ESP Kirk Hammet! And not just anyone, but the KH-2SE; a 100-units limited-edition. ¡A real beauty!

As I studied it, a phrase crossed my mind constantly: this is a tough guitar made for tough work. The ORIGINAL Floyd Rose has a thick black chrome finish, and the neck has a clear thick finish as well. (When you have to play two hours every night, sweat-induced damage is a major issue).

The battery box is a quick access one: you just push it on the edge and opens. This is way easier than most ones, and to make it more reliable it’s made of aluminum instead of plastic.

What I found more appealing was to compare the Kirk Hammet’s guitar with Hetfield’s. Even while being on the same band, each player have different needs and their guitars reflect that fact. James Hetfield wants a fat tone for his fast, intrincate riffs, so he opts for a fixed bridge on a heavy, all-mahogany guitar, and the fat neck profile fits larger hands comfortably; especially when doing chords with a fist-like grip. 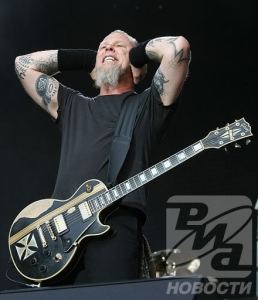 Kirk Hammet is the polar opposite: his physique is not just leaner (he doesn’t use heavy guitars), but his work is also different. He’s often doing fast solos, with lots of bending and heavy tremolo use, and he’s moving around the stage since he doesn’t have to sing. But his rhythm playing also needs a fat tone and qu 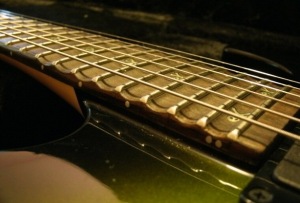 Kirk Hammet’s ESP meets his demands in different ways. The alder body gives the guitar good resonant properties while keeping it lightweight. The neck has a slim profile known to aid fast playing, and the fretboard is scalloped on the high notes for easier bending and vibrato.

A common problem with slim necks is that they are prone to warping, specially when using non-standard tunings. To prevent this, ESP used three pieces of hard rock maple, a construction method widely known to be effective against that problem.

To keep correct tuning after a wild tremolo shaking, an original Floyd Rose has been installed. But it has an unavoidable side effect: the tone is thinner than a fixed bridge. It seems to me that most Floyd Rose guitars sound very similar just because of that.

To keep some low-end, E

SP opted for a neck-through-body construction. This is a way to highlight the deep end of the sonic spectrum, a fact that can be confirmed by all those bass guitars using this construction. (Slappers prefer bolt-on basses because they drop some lows, thus enhancing treble). An additional benefit is that having no neck heel makes for a more comfortable access to the higher notes of the fretboard.

You can hear the results of this work in this short

While ESP could have used a glued-on neck (as Gibson does), the glue does absorb some of the vibrations coming from the neck. That’s why you don’t see many Floyd-equipped Gibsons: the resulting tone is very thin. That can be desirable sometimes, as when playing against a thick sound coming from other guitars, keyboards or horn sections. To know how a Gibson Les Paul sounds like when having a Floyd, just hear Neal Schon Journey’s “Revelation” album and tour.

While it’s true that world-class players like Hammet, Hetfield & Schon (sounds like a law firm, doesn’t it?) can call anyone to build the guitar they want, truth is you don’t have to be a superstar to get the instrument you need. Given the vast amount and variety of models available these days in any price range, no one should trade for a less-than-adequate axe. Just ask any seasoned musician to help you through the process of choosing the right instrument for your needs, technique and desired tone. Odds are they’ll be glad to do it.

I’m just so happy to be able to work with these high-profile instruments. Now I just have to wait for Robert Trujillo’s bass guitar! 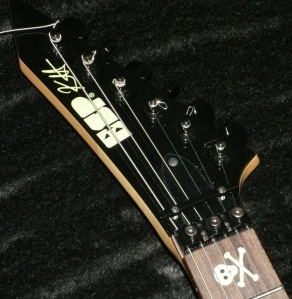